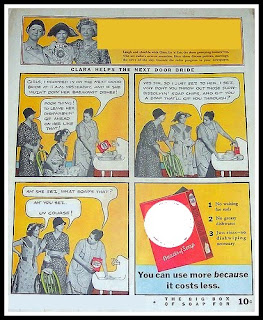 This was the first of its kind and gave rise to the term that defines this genre. What term?

Answer: The term is "soap opera." Clara, Lu, and Em (shown above) was radio's first soap opera, so called because of its sponsor 'Super Suds', a Colgate-Palmolive-Peet product. Anand, Arvind, Adi, Iam, Mohan, Hirak, Avi, and Nemani got it. Well done.
Posted by Raghu at 4:07 PM 8 comments: 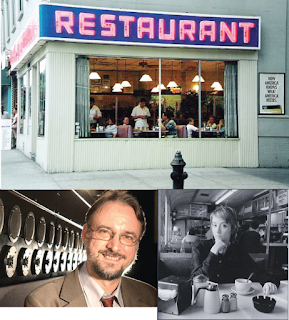 Answer: The connect is the MP3 audio compression format. Karlheinz Brandenburg (bottom left) used the song Tom's Diner by Suzanne Vega (bottom right) to test this compression scheme. The diner in the song is Tom's Restaurant (top) later made famous as Monk's Cafe in Seinfeld. Arvind, Rajesh, and Rajesh K. got it. Nice crack.
Posted by Raghu at 6:11 PM 4 comments: 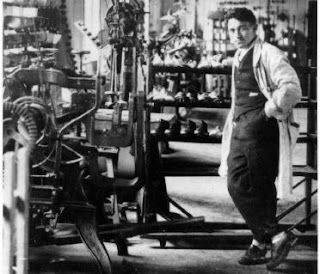 Aside: I will be pretty busy this coming weekend and probably even into next week. Expect the updates to be sporadic/non-existent till at least next Tuesday . Raghu Kainkaryam, a regular of both the UM quiz club and the blog will be the quiz master for the next week or so.

Answer: This is Adi Dassler, co-founder of Adidas. Ameya, Manix, Anand and Arvind got it. Well done.
Posted by Dinesh Krithivasan at 10:20 PM 4 comments:

What is being illustrated?

Answer: The buttered cat paradox - a humorous (?) combination of two adages about cats always landing on their feet and toast always landing on the buttered side. So, what happens if a cat is dropped with a buttered toast tied to it like shown above? Karthik, Matti Tapaninen, Raghu, anon, Mainak, Ramji, nice try, Riskit, anon, Arvind, hotmanoj and Nemani got it. Well done.
Posted by Dinesh Krithivasan at 9:06 PM 13 comments: 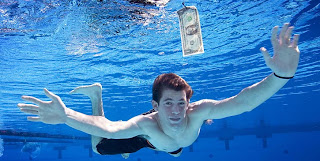 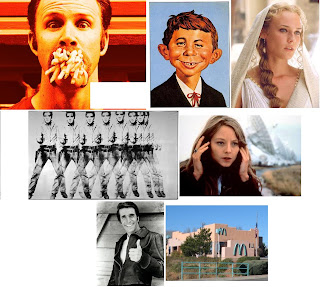 This is another tangential connect question similar to questions 444 and 461. Connect the images. The connect is more closely related to some visuals than to others. This is not an exhaustive list. More hints based on the response.

Hint: I just noticed an oversight on my part that might have made the question confusing. The first visual on the top left and the last one on the bottom right really point to the same thing. I meant to include just one of those two and included both by mistake. Hints for other visuals (in order from left to right, top to bottom) - the magazine he appears in, the character portrayed by the actress, the photographer, the novelist whose work the movie is based on and the television character.

Answer: The connect is unusual units of measurement. The visuals in order are a poster for the movie Supersize Me, a documentary about McDonalds, Alfred E. Neumann from Mad magazine, Diane Kruger as Helen of Troy, photo of Elvis by Andy Warhol, a screen shot from the movie Contact, Fonzie from Happy Days and the McDonalds shop in Sedona, Arizona (apparently the only McDonalds with non-yellow arches because turquoise suits the town's red rock). The connect to the theme is as follows - Big Mac index for exchange rates, Potrzebie for length (thickness of the magazine as defined by Donald Knuth), Helen for beauty (1 milliHelen is the amount of beauty enough to launch one ship), Warhol for fame (from the 15 minutes of fame quote), Sagan for 4 billion (from his "billions and billions" quote) and fonzie for coolness. Ramki was the only one to get it before the hint. Raghu, Ramji, Rajesh, Karthik and Matti Tapaninen got it after the hint. Well done.
Posted by Dinesh Krithivasan at 6:30 PM 7 comments: 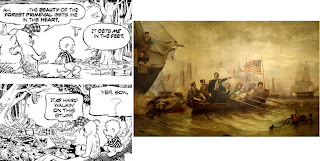 Some captions in the comics have been edited out. What comes in the blanked space denoted by the question mark? Connect it to the event shown on the right. 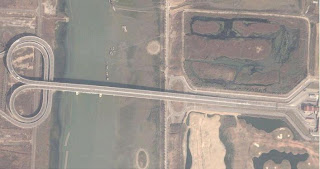 What is the purpose of this rather curious looking structure? Where is it located?

Answer: This is the lotus bridge on the border between China and Macau. China follows driving on the right side of the road while Macau follows driving on the left side. The bridge facilitates the switch. Iam + Balls, hotmanoj, Rajesh K, Kamal Rathi, Karthik, Nemani, Rajeev and Krithi got it. Well done.
Posted by Dinesh Krithivasan at 6:52 PM 9 comments: 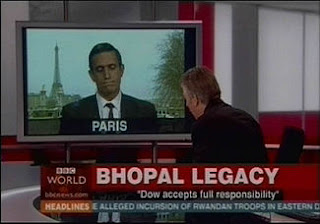 Answer: A culture jamming group called The Yes Men have made a habit of pretending to be spokespersons for corporations and appearing on various shows to make shocking confessions and announcements on behalf of these corporations. Here, Andy Bichlbaum, a member of the group is posing as a spokesperson for Dow and fully accepts responsibility for the Bhopal disaster. Nemani, Karthik, Matti Tapaninen, Mekie, Raghu, hotmanoj and Hari got it. Well done.
Posted by Dinesh Krithivasan at 7:04 PM 7 comments: 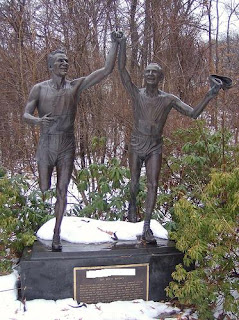 The two statues are of the same man - in his youth and old age. Identify him and the location of the statue.

Answer: This is the statue of the legendary long distance runner John Kelley located on the Boston marathon course about a mile from the notorious Heartbreak hill. He won it twice and completed the marathon a whooping 58 times running his last full marathon when he was 84 years old. Just like this year's champion Robert Cheruiyot and the 2007 champion of the same name, there was another John Kelley who won the Boston Marathon in 1957. Karthik, Mohan, Raghu, Matti Tapaninen, Nemani and Adi got it. Well done.
Posted by Dinesh Krithivasan at 10:58 PM 7 comments: 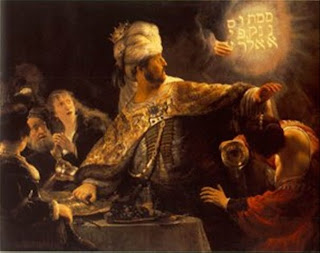 Shown is an illustration of a biblical story. What is the etymological significance?

Answer: This is Rembrandt's painting "Belshazzar's Feast". In the Biblical story, a hand mysteriously appears during the feast and pronounces doom on the king's reign by writing on the wall. The phrase "writing on the wall" originates from this incident. Rohan, AJ, Manix, Karthik, Nemani and anon got it. Well done.
Posted by Dinesh Krithivasan at 12:31 AM 7 comments: 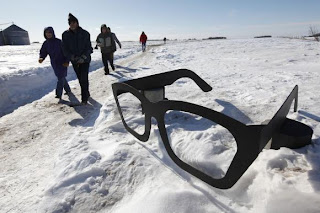 Answer: This is Buddy Holly's memorial near the site of his plane crash (the day the music died). Shibin azad, Nemani, Karthik, Matti Tapaninen, Rajesh K, Rithwik and v. chandrashekar got it. Well done.
Posted by Dinesh Krithivasan at 12:14 AM 8 comments: 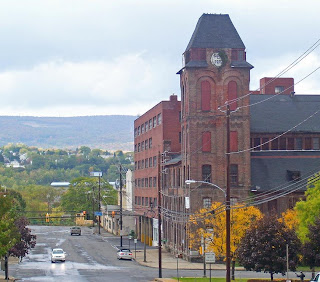 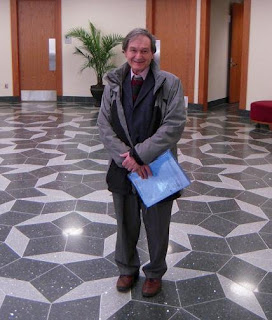 Identify him. This one is probably a bit too geeky even by my standards.

Answer: The man is British mathematician and physicist Roger Penrose. He is standing on a floor tiled with an aperiodic tiling pattern that he discovered in the 70s. While it is trivial to tile a space with periodic tilings (square tiles for example), Penrose found a family of aperiodic tiles that have no translational symmetry. Raghu, Rajesh, hotmanoj and Amresh got it. Well done.
Posted by Dinesh Krithivasan at 11:50 PM 6 comments:

The pictures show two of the most famous events of this kind. Identify the events.

Answer: The answer I was looking for was the "Last Spike" - an event marking the end of construction of a railway when they get some celebrity to drive the last spike in. The two visuals show the construction of Grand Trunk Pacific railway and the Canadian Pacific railway. Mohan Phadnis, Nemani, Jaggi, Adi, Krithi, Matti Tapaninen and hotmanoj got it. Well done.
Posted by Dinesh Krithivasan at 7:58 PM 7 comments: 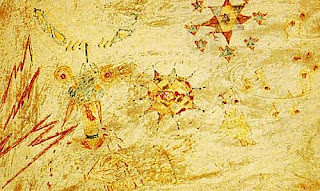 This is a child's doodle. What did this inspire?

Answer: John Lennon's son Julian drew this and called it Lucy in the sky with diamonds. At least, that is the excuse the fab four came up with for writing a song about acid. Anirudh Patil, Nihar, Avi, Adi, Rajeev, Nemani and Krishnan got it. Well done.
Posted by Dinesh Krithivasan at 8:47 PM 8 comments:

Identify the event and the associated memorial.

Answer: The sinking of the Greenpeace ship The Rainbow Warrior off the coast of Auckland by agents of the French government. While originally planned as a sabotage, it resulted in the accidental death of a photographer named Fernando Pereira. There was a major fallout between the French and New Zealand governments and this event went a long way towards shaping New Zealand's policy on nuclear weapons. Krithi, Matti Tapaninen, Prachi, Karthik, Mohan Phadnis, 2lrbl, Schmetterling, Corina and Rithwik got it. To the QM's intense delight, Iam guesses incorrectly. Well done.
Posted by Dinesh Krithivasan at 6:40 PM 10 comments: 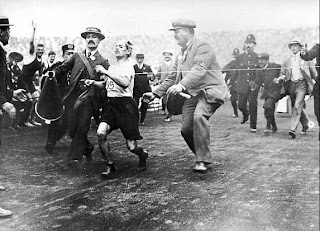 What is happening here?

Answer: Dorando Pietri, an Italian marathon runner in the 1908 Olympics marathon who repeatedly collapsed during the finishing stages of the race. He was helped up by the officials each time and finally crossed the line to win the gold. However, the American team protested this external aid and got him disqualified. The resulting press made him very famous. Krithi, Manix, Pavan, Rohit, anon, Adi, Arvind, Rajesh, anon, Iam, Matti Tapaninen, Hirak, Mohan Phadnis, Nemani and Rithwik got it. Well done.
Posted by Dinesh Krithivasan at 7:08 PM 15 comments: 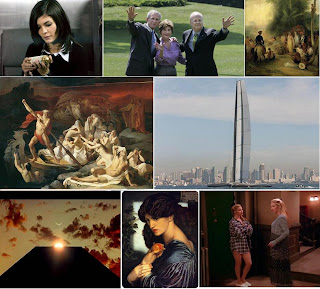 This is another attempt at a tangential connect similar to Q444. Identify each of the images and the central theme connecting them. The connect isn't exhaustive (only a few items left out though) and some images connect to the theme more tangentially than others.

Hint 1: The connect isn't related to Greek mythology (at least not directly).

Hint 2: The connect is movie related.

Hints on how each visual connects to the theme (from top to bottom, left to right): Her lineage, his (not dubya's) nickname, the custom, the ferryman (slightly vague), the company, the story that inspired the movie, her Greek name and a generic term for the characters.

Answer: The visuals are Sophie Neveu from Da Vinci's code, Karl Rove with the Bushes, the practice of Sati, Charon the boatman from Greek myth, the BMW Oracle that won the America's cup in 2010, a scene from 2001: A space Odyssey, Persephone from Greek myth and Phoebe and Ursula from Friends. The connect I had in mind was that these are the names of some of the programs in the Matrix trilogy. The connects are as follows: Sophie Neveu is a descendant of Jesus through the Merovingians, Karl Rove was nicknamed the Architect, Sati is straightforward, Charon inspired the trainman character, BMW Oracle is owned by Larry Ellison of Oracle, 2001 (novel & the film both) was inspired by a short story called the Sentinel, Persephone is obvious and the Buffays are twins. Iam, Pavan, Rajesh, Jaggi, Karthik and Mohan Phadnis got it. buckingfastard identified most of the visuals before the hints. Well done all.
Posted by Dinesh Krithivasan at 1:39 AM 9 comments: 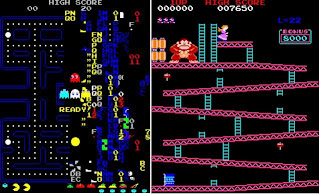 These are the two most famous examples of what?

Answer: The answer I was looking for was Kill Screen - the name given to a level in a video game beyond which it is impossible for any player to proceed due to fundamental programming flaws or design oversights. They are most often found in the early arcade games (Pac-man and Donkey Kong shown here) where register overflow errors were the frequent culprits. The Pac-man kill screen is especially famous with even a $100,000 reward for a player who can get past this level. Mekie, Iam and Hari got the answer I had in mind while Adi and Schmetterling went with more generic connects. Well done.
Posted by Dinesh Krithivasan at 12:12 AM 5 comments: