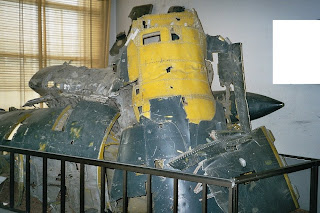 Sorry for the late update. A question symbolic of how my week has been. Identify.

Answer: This is the wreckage of Gary Powers's U-2 spy plane - the one that the Soviet shot down and the US denied ever existed. Matti, Jamie, Krithi, Siddarth Pai, Kaushik and Divya Shankar got it. Well done.
Posted by Dinesh Krithivasan at 1:37 AM 7 comments:

Sorry for the late update. Connect the visuals. Some visuals are more directly related to the connect than others.

Answer: The connect I was looking for was the "Unseen character". The visuals are Charlie Brown referring to the "red-haired girl" who is never seen in peanuts, the characters waiting for Godot who never shows up, Beatrice Baudelaire - a character from Lemony Snicket's A series of unfortunate events who never appears in the books but is shown for a brief second in the movie (played by Helena Bonham Carter), Dulcinea from Don Quixote, Niles' wife Maris Crane from Frasier and Harvey, Jimmy Stewart's 6 foot tall rabbit friend from the movie Harvey (which I strongly recommend). I got the idea from the character of Howard Wolowitz's mother in Big Bang Theory but forgot to include him in the connect. Divya and Matti got it. Well done.
Posted by Dinesh Krithivasan at 2:49 AM 5 comments: 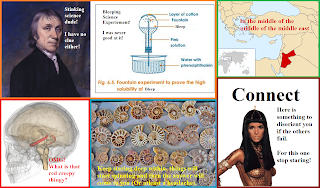 Question courtesy Iam. You all know what that means. I am not responsible for its awesomeness/arbitness.

Answer: Quoting Shiva verbatim - Dude is Joseph Priestley, the gas-man credited for Oxygen and Ammonia (NH3). Experiment is 'Ammonia Fountain', a fun demonstration to teach chemistry or gas laws to kids. Country is Jordan whose capital is Amman (From Ammonites / Children of Ammon). Red thingy is the Hippocampus (Ammon's horn. Hippocampus itself means seahorse) a vital organ for memory making and retention (Think Memento). Both names are due to visual resemblance. The spirals are Ammonites a species fortunate enough to be extinct and fossilized so as to adorn the earrings of pretty girls. The character is "Anck Su Namun", no big connection other than to point out (bleeped by moderator :))
Posted by Dinesh Krithivasan at 3:55 AM 5 comments: 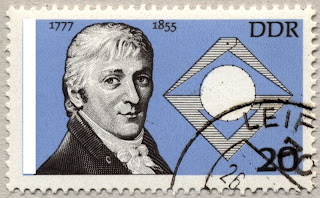 Today's question is courtesy Divya. Stamp in honor of whom and what particular achievement of this person does the stamp honor?

Answer: Johann Carl Friedrich Gauss aka GOD. At the ripe age of 19, Gauss showed that the 17-agon aka heptadecagon is constuctible with a compass and straight edge. This proved fortuitous for mathematics as a whole since it convinced Gauss to become a mathematician at a time when he was wavering between philology and math. He liked this result so much that he asked that a heptadecagon be inscribed in his tombstone. The mason declined since it would essentially look like a circle. Raghu, Siddarth Pai, giantamoeba, Saket, Iam, Kapinjal Chowdhury, Matti, Krithi, RJD and Rajeev got it. Well done.
Posted by Dinesh Krithivasan at 3:46 PM 10 comments: 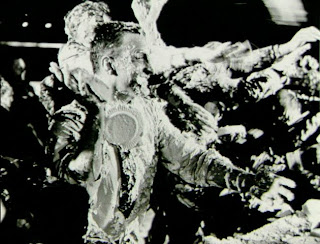 Rightly phrased, this question will be a bit too easy. So, I will just say: Identify.

Answer: This is the famous deleted scene that was supposed to be the climax of Dr. Strangelove. Kubrick had originally planned the movie to end with a pie fight between the Russian ambassador and George C. Scott. You can actually see the food lined up in trays in many of the scenes in the war room. Of course, this didn't make the final cut and the movie ends instead with the iconic images of several nuclear explosions accompanied by Vera Lynn's "We will meet again". Matti, Divya Shankar, Siddarth Pai, anon and Jamie got it. Well done.
Posted by Dinesh Krithivasan at 5:26 PM 5 comments: 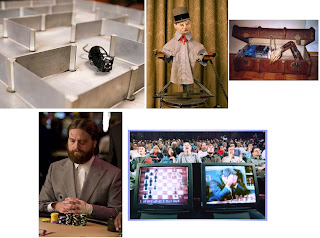 Identify the man responsible for the artifacts on the top row. The two visuals at the bottom are more oblique clues that the same man was responsible for.

Answer: Claude "The GOD" Shannon. I maybe biased but this man deserves to be known in the same league of scientists as Einstein and Feynman for his contributions. His master's thesis paved the way for digital computers by proving the sufficiency of Boolean logic. He single-handedly created information theory, the theoretical framework of our generation's information revolution. He also was the first to initiate a theoretical study of cryptography. His PhD thesis on an algebra for biology is a little known gem. As if all this isn't awesome enough, he was an expert at juggling, machine learning, uni-cycling and card counting.

The pictures show some of his less famous inventions: He built a mouse called Theseus that could figure out a way out of a maze. He built a machine that could juggle 3 balls at a time (he also proved a theorem about juggling) and he built the "Ultimate machine" upon a suggestion from Marvin Minsky. He wrote the first paper on how one might program a computer to play chess and developed many card counting tricks that he personally used to great effect in Las Vegas. 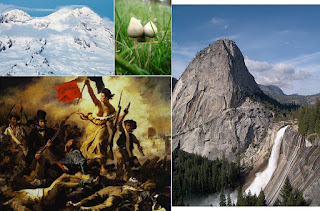 Connect an aspect of the central figure of the painting in the bottom left to the other three images. In the top left, the circled portion is relevant to the connect.

Answer: The painting is Liberty leading the people by Eugene Delacroix. Lady liberty is wearing the Phrygian cap, a cap that is similar to the one that freed slaves wore in ancient Rome. Especially after the french revolution, that cap has come to signify freedom and is also called the Liberty cap. The other 3 pictures show formations called liberty caps due to their structural similarity to the Phryigian cap. The visuals are liberty cap peak of Mt. Rainier, liberty cap mushroom and the Liberty cap dome next to Nevada falls in Yosemite (this is the reason I posted this question). Raghu, Siddharth Pai, Saket, Divya, giantamoeba, Krithi and Iam got it in varying degrees. Well done. 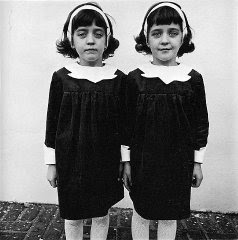 Answer: Identical twins by Diane Arbus. The homage I had in mind is the eerie scene from Stanley Kubrick's "The Shining" where the twins stand in an identical pose and invite Danny to play with them. Kamanasish, Saket, Krithi, Matti, Siddarth Pai, Raghu, Mekie, Divya, Jamie and Iam got it. Well done.
Posted by Dinesh Krithivasan at 10:33 PM 11 comments:

This building complex, a monument historique, looked like the image on the left in its heyday. After closing down in the late 1980s and falling into disuse, it is a common target of graffiti artists today. Identify the complex.

Answer: Piscine Moliter in France after which the protagonist is named in The Life of Pi. Divya, giantamoeba, Saket, Siddarth Pai and Krithi got it. Well done.
Posted by Dinesh Krithivasan at 1:15 PM 7 comments:

This phrase can be used to describe a feature of the image on the right and many more images just like this one. However, the only known historical usage of this phrase (in its exact form) occurs in the first image. Identify the first object and the phrase.

Answer: The phrase is "Here be Dragons" used to denote uncharted areas on ancient maps. Though this phrase is now rather popular, it has only appeared in this exact form (in Latin) in one historical map namely the Hurt-Lenox globe. Siddarth Pai, Iam, Raghu, Krithi, anon, Giantamoeba, Divya and Saket got it. Well done.
Posted by Dinesh Krithivasan at 3:13 AM 9 comments: 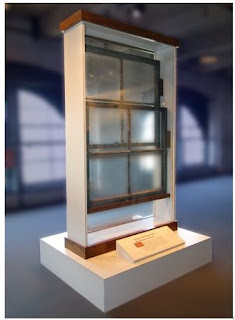 This was recently auctioned off for more than $3 million dollars. What is it?

Answer: This is a panel from the window from behind which Lee Harvey Oswald shot JFK. Siddarth Pai, Ameya, Matti Tapaninen, AJ, Raghu and Giantamoeba got it. Well done.
Posted by Dinesh Krithivasan at 1:27 AM 8 comments: 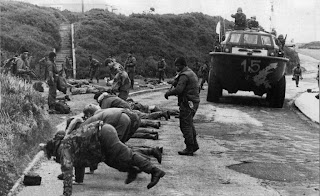 Today's question is courtesy Matti Tapaninen. Shown here is the start of what major event of the late 20th century?

Answer: The visual shows the British garrison in Falklands surrendering to the Argentinian forces thus starting the Falklands war. Ameya, Jaggi, Karthik and Siddarth Pai got it. Well done.
Posted by Dinesh Krithivasan at 9:42 PM 4 comments: 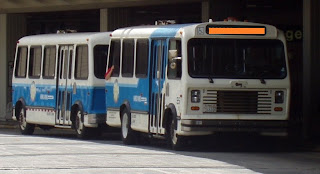 Hi all!!! This is Dinesh taking over for Raghu in his absence. Irregular updates and obscure trivia shall be the norm as always. Identify the blanked out portion in this airport shuttle.

Answer: This is the wiki-wiki shuttle bus that operates at the Honolulu airport in Hawaii. Wiki means quick in Hawaiian. The author of the first wiki, Ward Cunningham, was amused enough by the name to name his project after it. Wikipedia came much latter. Matti Tapaninen, Kapinjal Chowdhury, Kani, Jaggi, Krithi and Ajit got it. Well done.
Posted by Dinesh Krithivasan at 3:30 AM 8 comments: 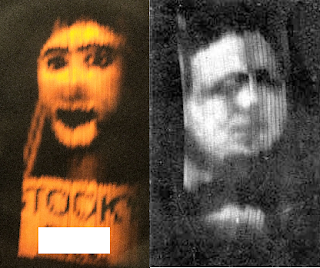 A recreation (left) and a photograph (right) of the first few what of their kind?
Answer: These are the first few images transmitted on the television by John Logie Baird. Ameya, Iam, Divya Shankar, and Dinesh got it. Nicely done.
Posted by Raghu at 8:36 PM 4 comments: 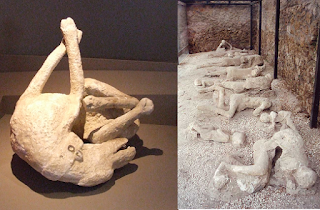 These plaster casts of the original discovery are a ghastly reminder of what natural disaster?
Answer: The eruption of Mt. Vesuvius leading to the destruction of Pompeii. Dniesh, matti tapaninen, Krithi, Iam, Sribharath, and rajeev got it. Nicely done.
Posted by Raghu at 10:09 PM 6 comments: