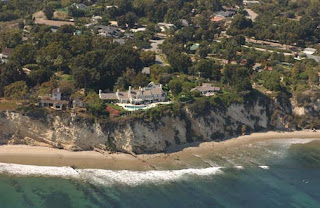 What phenomenon gets its name from the controversy surrounding this picture?

Answer: The house belongs to Barbara Streisand and the picture was taken as part of a study on erosion of the California coastline. Streisand sued to have the photo removed from the web and the resulting popularity made the picture far more famous than it originally was. Since then, the Streisand effect has come to refer to this kind of negative publicity resulting from censorship. Mrinalini, Rithwik, P, Manix, Iam (who has moral & other issues in answering the Q), mysore, and Sweta got it. Well done all and to set the record straight, Iam asked this question in the quiz club a while back.
Posted by Dinesh Krithivasan at 12:45 AM

The Streisand Effect. Not sure, but I think Hirak covered this in another quiz... getting old, Dinky, can't remember :-P

Its not morally right to answer this question

Streisand effect : when an attempt to censor certain piece of information backfires

@Manix
I guess I am getting older too to think it was the Jane Fonda effect instead of Ms. Streisland. (BTW:It was Raghu who asked the question)

Before half the world is blamed for asking the question at quizclub, Iam would like to own up to it.

Iam asked the question in quizclub. Seeing that very little memory was allocated to that by the attendees, Iam will take that as valuable feedback for future questions.

Some thoughts on the matter:
* Make attendees repeat each question and answer 10 times
* Make them also repeat "Asked by Iam"
* Make them sign an agreement to that effect
* Tattoo it on them like in Memento
* Sue Hirak and Manix