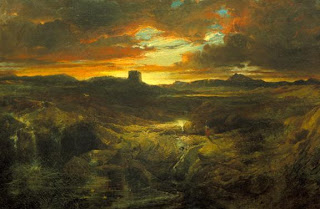 This painting depicts the landscape described in a famous poem. The object in the center (slightly to the left) is now famous in its own right. Identify the poem and the object.

Update: Looks like the visual gives very little to work with. Still more hints below and apologies for the bad visual.

Hints: The poem is from the 19th century but the object in the center forms the central theme of another work of literature (by a different author) from the 20th century. The poem is about the journey of a character towards the object in question. The 20th century work expands this quest into a vast epic that combines many other elements to the story line. The object in question is a tower alright but the work is not LOTR. The original poem is by (highlight to see) Robert Browning


Answer: The poem is "Childe Roland to the dark tower came" by Robert Browning. The title itself comes from Shakespeare's King Lear. Stephen King was inspired by this poem to come up with his magnum opus, the Dark Tower series in which a titular character named Roland undertakes an epic quest to reach a dark tower. I haven't read any of the books but some of my friends who are Stephen King fans swear by them. Raghu, Renuka and Mekie got it. Well done.
Posted by Dinesh Krithivasan at 4:23 PM

the poem and the other work of art is Ulysses by Tennyson and Joyce respectively, though I couldn't identify the landmark !!

lord of the rings??

Stephen King's The Dark Tower (series) of novels is largely influenced by this poem.