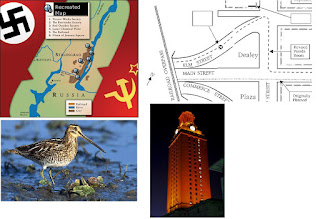 Answer: The connect is Snipers. The map is that of the Battle of Stalingrad where Soviet snipers fought against German troops (made famous in the movie "Enemy at the gates"), a map of JFK's parade route on the day of his assassination, the bird snipe which is supposedly very difficult to hunt and from which the term sniper came to refer to sharpshooters and finally the clock tower at UT Austin from where Charles Whitman sniped down 14 people. Ashwin, Raghu+Mekhala, Vikrant+Keshav and Divya got it. Well done.
Posted by Dinesh Krithivasan at 9:34 PM

Sniper.
The first map shows the Battle of Stalingrad, where snipers from the German and Soviet army battled each other, made famous in the movie the Enemy at the gates. The second map is a depiction of the routes followed by President JFK when he was assassinated by a rifle shot. The tower is the University of Texas tower, where in 1966 Charles Whitman barricaded himself at the top and killed 14 people with a rifle. Finally, the bird is the snipe from which the term 'sniper' came about.

SNIPERS
L-R (clockwise): Battle of Stalingrad, where Soviet snipers inflicted heavy casualties on the German troops (most famous: Vasily Zaytsev),
Dealey Plaza in Dallas, Texas where John F Kennedy was assassinated by sniper Lee Harvey Oswald,
UT Austin shooting and the tower sniper was Charles Whitman,
The bird 'snipe' which is elusive and hard to kill - a skilled hunter who could kill it was called sniper.

I just don't get the connect, though I do see the Battle of Stalingrad, Kennedy's final parade route and a female dunlin in some wetlands (maybe its got something to do with the Minesweeper USS Dunlin?).

1. Battle of stalingrad had 2 snipers... Zaitsev and Konig of Enemy at the gates fame

2 is Elm stree where JFK was assasinated

4 is the Univ of texas tower, from where the Whitman shootings took place