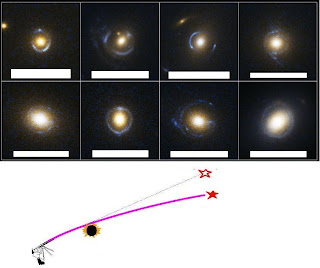 Shown are several examples of a certain phenomenon. What is the phenomenon (be as precise as possible) and what is its historical significance?
Update: I refuse to believe there is no one out there who is as geeky as me. So, I am running the question again with a clue.

Answer: The answer I was looking for was "Einstein Rings", multiple images of stars/galaxies formed due to gravitational lensing. This phenomenon served as one of the first experimental verifications of Einstein's general theory of relativity. A schematic of Arthur Eddington's experiment verifying this effect is shown in the second visual. Adi, Rajeev, capt. p j Vogon, Vikrant and Rajesh got it. Well done.
Posted by Dinesh Krithivasan at 9:50 PM

Phenomemon is gravitional bending of light. The images are of Mercury which showed bending of light and was the first experimental confirmation of the theory of relativity.

Stars near the Sun have light curved by gravitational field. Experimental proof of theory of general relativity by observing solar eclipses (in 1919?).

Have you seen the PBS program Nova? It has a beautiful explanation about this.

The theory of relativity proposed that light bends as it passes by heavy bodies.

In 1919, this was observed by Arthur Eddington during a solar eclipse.

Einstein then explained it in his General Theory of Relativity.

Until 1979 when the Twin Quasar was observed this was just theory.

is this the gravity lens effect?

If I were you, I wouldn't be surprised if you are the only Dinki-level geek around. :) Wait, I take that back. If I were you, that would make two of us!

1. Observations of "quasar" black holes.
2. Depiction of Arthur Eddington's experiment of the 1919 solar eclipse that proved the superiority of Einstein's Theory of Relativity over Newton's framework.

Einstein ring formed due to gravitational lensing. Formation of such rings was predicted by general theory of relativity which was later observed. Another test in favor of general relativity.

Gravitational redshift? If my answer is wrong, then it was the red star that threw me off :-P

Historical significance: this was the basis of special relativity?